Hard to believe that I have been here for 4 weeks already.

On a day-to-day basis I feel like I’m not actually achieving much but when I look back on where I was on 20th March I done a huge amount. And every now and then I have to stop and do nothing and remind myself that time out is very much needed. So today for the first time since getting here I have not put on my work clothes but instead did a 90 minute yoga practice followed by and 30 minute meditation and suddenly everything feels so much better. And for the rest of today me and merlot will chill out with the radio on catching up on some lonely planet mags (you can make the girl sit and stop but you can’t stop the excitement and awe of all the world has to offer).

So, an update on works. I have met the most brilliant builder; can’t really go wrong with a Dave though can you!? He pops round once per week and gives me my list of jobs to do, comes back the following week to check up and give me my next list……. However, I am now as a point where I need him to come for a day.

So the saga with the floorboards continues…….. well the rot was worse than first though so now all the boards are up only to discover some of the joists were rotten too. Two of which are beyond hope. Under the others I have dug out the ground underneath them and raised them up on to some old ceramic tiles I found in the barn (saves taking them to the tip). Any salvable boards have had the rot cut out and are now lying in the barn. All have now been treated with nasty chemical to stop any more rot setting in. Next up is to put them all back.

So here is the room at the moment: 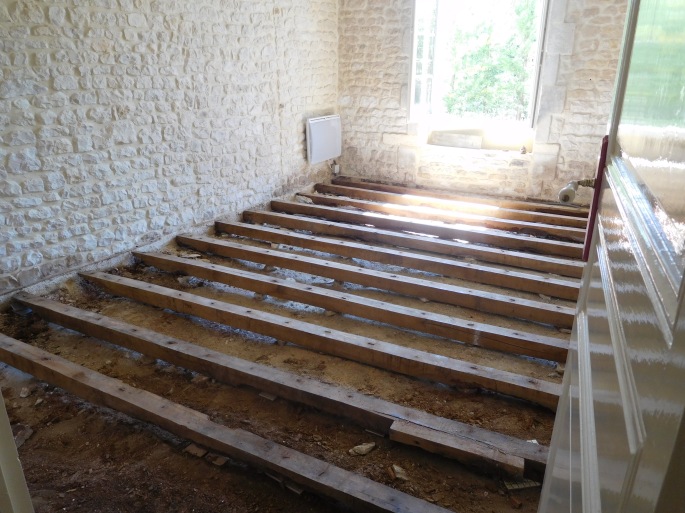 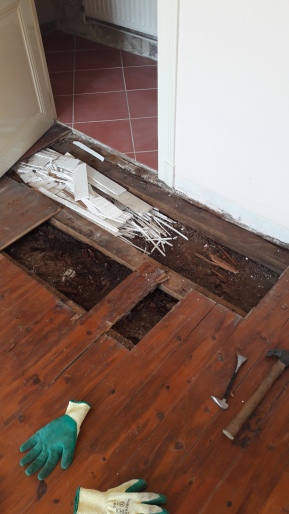 And what did I discover under the boards? Yep polystyrene ceiling tiles! No wonder the floor was bouncing and I guess it’s one way to dispose of the left-over tiles.

In my naivete I thought it would be nice to have one room finished so thought I’d tackle the toilet.

This is what it looked like to start with and how it looks now – four hours (yep 4) to remove those ceiling tiles. I’m left the question polystyrene ceiling tiles, why? 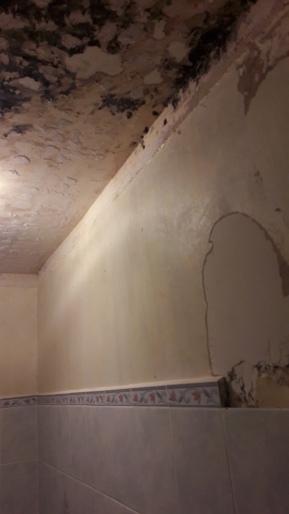 Plus to add to the fun the wall tiles have been stuck with one inch thick cement direct to the plaster board.

Ever wish you’ve never started something?

Needless to say after a bit of head scratching added the cost involved in putting it right I have now decided to knock the whole thing out and do away with a toilet in the middle of the house with no natural ventilation!

I was feeling decidedly dejected after all this so headed out to my allotment to get some sense of achievement – v pleased with that.

Work has started on the cottage so I can get than up and running – first up an huge amount of filing as the finish is very poor and to cover up the vile purple paint. Hideous paper too but to remove it is not worth the headache right now so over-painting is the only way to go. Next up I will rip out the kitchen in there and then it’s over to Dave to finish it off with me as labourer.

What else have I been up to? Oh yes finally after 3 weeks I have a bank card and cheque book but I’m very limited with what I am allowed to spend. Not that I will need with much but I am only allowed 500 euros a week. No problem I say when does the week run, from Sunday or Monday? Oh no madame its from when you take it out!   So if I take 400 out on Wednesday I can only take another 100 until the following Thursday? Oui!

Ok so how do I change my pin number to something I can remember? You can’t. Excuse me? The number you have been given is it you cannot change it. Gawd help me!!!

Then a light came on in my car. Now most of you know I have no idea about cars really and the man in garage said here is the screen wash don’t’ worry about anything else. So I take the car to the garage (a 30 minute drive) as I also need a new number plate. I have no idea if car is safe drive so in my best little lost English girl I persuade them to look at it there an then after telling them that leaving here is not an option – it’s along walk home! Long story short car is not safe to drive so they fix it there and then and 2 hours later I’m on my way back home.

I’ve met a few of my neighbours, most of whom are very lovely and very patient with my appalling French. Well all except one! Yep my immediate neighbour, is putting it mildly, a complete pain the arse! Within 2 days she had complained about me to the mairie (mayor). Last week I was summoned to the mairie’s office while her mother stood and shouted at me. About what I honestly have no idea other that if I didn’t stop parking outside my house she would take me to court!!! I confess when I got home I shed a few tears but then got on my notaire to confirm in writing what I already knew. Well of course it’s my land and I can park on it and my neighbour only has right of access. But not only that she is not permitted to park on my land much less tell me I can’t park there. I look forward to returning to the mairie’s office tomorrow with my letter. I would have been neighbourly and allowed her to park there – there is plenty of room for both of us – but quite frankly not now!!!

The week ahead sees me carrying on with the cottage, getting the hand of mixing and using lime mortar and doing little bits in the garden and then a full on clean up ready for my visitors on 27th April. Looking forward to taking a few days out and exploring some more of the local villages.

Well that’s me for now.

Hope you are all well and enjoying the extra long weekend in the sunshine.