Well the last few weeks have gone by in a complete blur.

I’ve had my first visitors…… eeekkk Queue mass clean up; scrubbing, dusting, polishing and mopping. Really how do window frames get so mouldy???? Well quite easily it would appear if your house has been shut up for about a year with no heat and no air flow through it. Despite that is very nice to at last be able to see the sunshine through the windows.

So first up was Chantal, a lovely lady from Paris who I met in Goa on my yoga training. She was passing through on her way to friends further south and also has a friend who lives in the next village to me who we met up with for coffee and who I have met up with a few times since. We went out to see the local donkeys who really are like cuddly teddy bears. 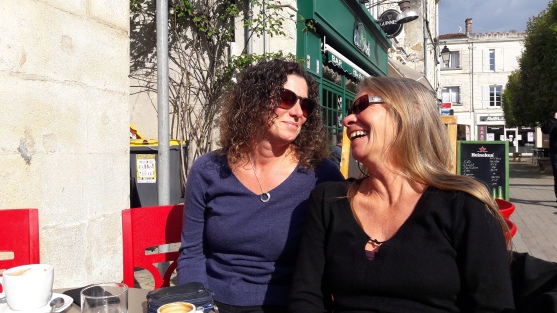 And here’s what is left of the church in my nearest ‘big’ town.

Chantal left on Thursday morning and Sue and her husband Gez arrived Thursday evening. Luckily my humax arrived Thursday too so barely had they got their coats off and I put them to work setting it up. Most of you know I would have a flipping clue! So fear JJ you can now watch as much telly as you like when you visit now xxxxx

A few days of chilling out, driving around the local villages and towns, Saintes, Cognac, Matha and to some of the beaches for oysters, wine, ice cream and sand dunes. 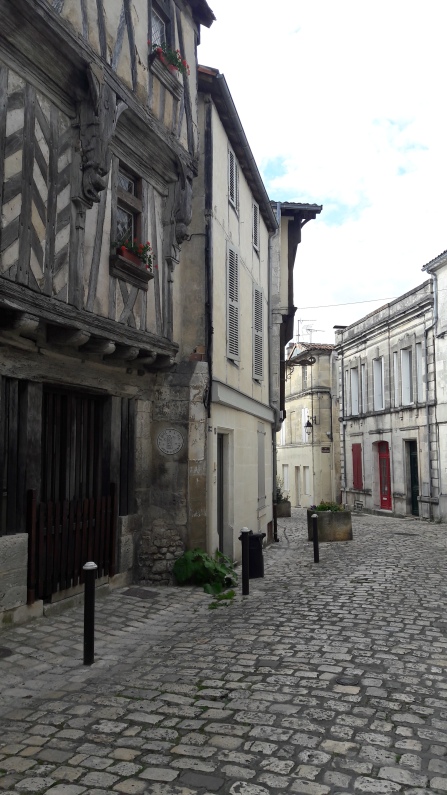 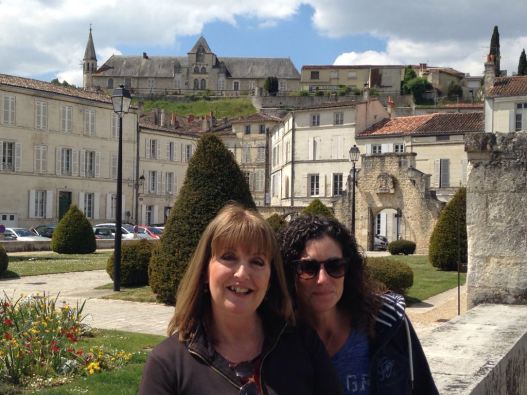 Me and Sue in Saintes

Me and Gez outside my house 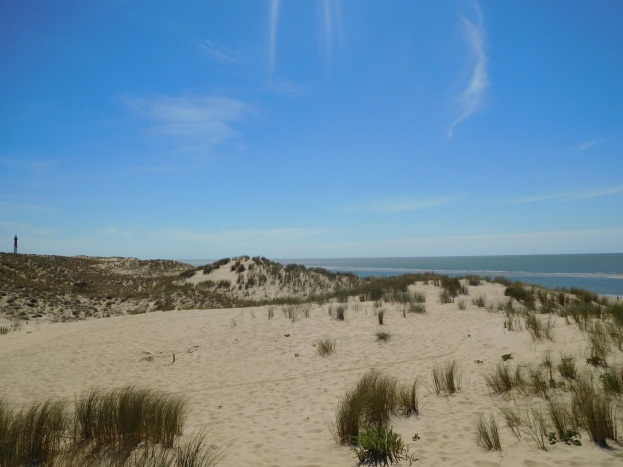 First things first – my neighbour. Well a letter was sent, with a bit of help from Chantal, and so far not a word. So that hopefully is the end of that.

And I know you are all dying to know what the latest is with the floorboard saga! Well I have good news; half the floor is now back down –yippeee! The remaining floorboards will be delivered over the next few weeks. And yes super Builder Dave came to the rescue. He is working on a house up the road where all the flooring is being replaced so the boards are being ‘disposed’ of at my house. Where I get to clean them, treat them and map them out ready to be laid. Here’s progress so far: and yes the observant amongst you will have noticed they are a different colour but once it’s all down, sanded and re-varnished it will be fine – she says trying to sound convinced……

I continue to work on the cottage and have now reached a stage where I need someone taller than me to finish off the filling and sanding so I can get on with painting the ceiling and second coat on the walls – but at least the vile purple has now gone.

What else have I been up to on the house? Oh yes with a huge amount of help from Sue and Gez I now have a floor plan for the bedrooms upstairs. But first things first, is to sort the leaks out in the roof. We have had a lot of rain lately and I spend the nights in bed listening the drips across the ceiling collecting in the various buckets and boxes I have up there to catch as much as possible. I’m making it sound worse than it is really is but at night when it’s quiet everywhere it is like some form of water torture. Dave and ‘the men’ are booked to arrive in a couple of weeks now the weather is improving to come and sort the roof, put ceilings and one side of stud walls and masses of insulation.

Now you need to use your imagination here but here is one bedroom with bathroom and checkout those beautiful beams: 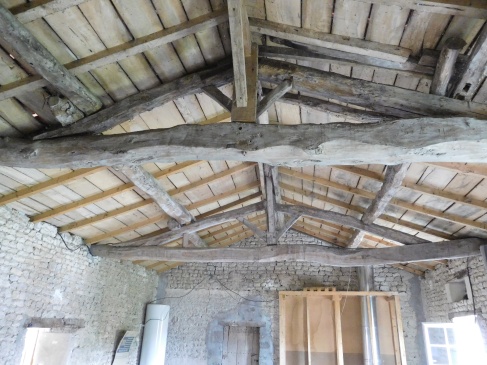 Unfortunately I had to make a few ‘worms’ homeless yesterday as I treated the floorboards before they invited their extended families round to join the party with the drips of water.

Last Monday was a bank holiday here and our village lunch. I decided to go along to show my face and not without some trepidation I must say. I was on ‘le table anglais’ so could at least talk to a few people. I was probably the youngest by about 20 years and it was a bit like walking into the slaughtered lamb at the start of American warewolf in London as everyone had a good look a new “young (I’ll take that!) English girl who lives in Roger and Carole’s house and is on her own. I wonder how long I’ll be here before it becomes my house?

Well lunch started at 12.30pm and the drinks and food flowed. First up was a variation on a kir – rocket fuel.

Having previously stated that I didn’t eat meat the rest of the day passed like that scene from My big fat Greek wedding – he don’t eat no meat? I make lamb!!! And no, scraping the chicken gizzards off the salad is not going to work for me. I have to say that even if I did eat meat nothing could persuade me to eat a chicken gizzard salad!!!

In between each course there was dancing – every one gets up for a spin around the floor. They are all very good dancers but goodness they look so miserable although as the afternoon progressed some were in danger of cracking a smile.

But this time the wine was flowing; choice of red, white or rose. Main course arrives. I tried not be too precious about the whole meal being served from one plate and I was very happy with my garlic laced potatoes (2 bite sized) and 1 tomato. They kept rushing up with more potatoes and tomatoes but still not really understanding someone not eating meat, so no, I don’t want the foie gras sauce poured over my dinner!

A plate cleansing sorbet next – oh my laced with pineau.

Dessert. Well I learnt something that day. Never in a million years would I have guessed that ‘omelette norveigen’ was baked Alaska. And baked Alaska drowning in neat alcohol too.

More dancing – including some weird thing that I can only describe as a cross between the time warp and the birdy song that everybody got up and joined in.

Café to finish and finally at 6.30pm it was time to go home very full and little bit tipsy and amazed that they can do all that for 11 euros each!

Ok Amigoes it’s time for me to go and get beds ready and tidy up a bit before Dad arrives on Thursday night. His friend is bringing him over and goes back on Saturday, Dad staying on for another week. I wonder if we’ll get through the week without driving each other mad?????