Well here we are in March already and I’m finding it very hard to believe that come the 21st March I will have been here for a whole year.

A big reason for moving to France was the weather. Now while I didn’t expect tropical temps all year I certainly wasn’t expecting temps of -7 and this! 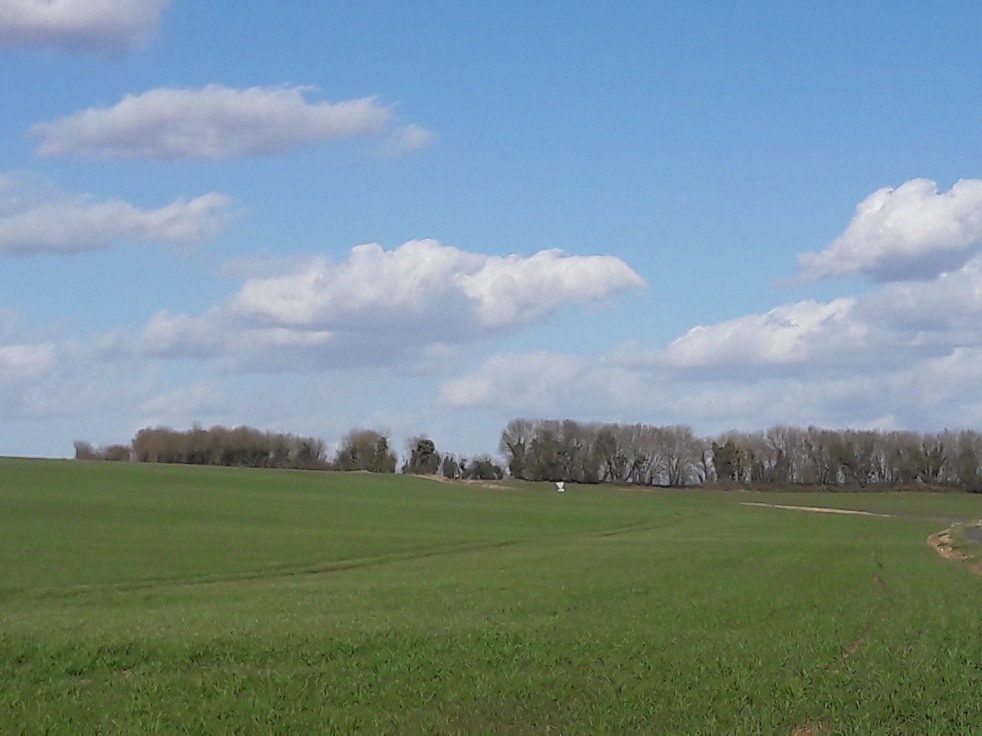 When I last left you I was just about to start work on what will be my bedroom in preparation for the plasterer. Well I’m pleased to say that after a lot of hard work I’ve made the deadline. I’ve hacked off plaster, built walls, insulated them, fitted lighting and sockets, plumbing for the shower, made a door, leveled the floor and sandblasted the beams.

First up was to level the floor using OSB flooring. What a treat to be able to walk on a solid floor in a straight line rather than a route around the holes!

Then it was the sandblasting. A long hard day of me loading 35kg bags of sand into the machine while Builder Dave did all the hard work at the beams. In total, I loaded 420kgs of sand. Of course the next day 420kgs of sand had to be swept up and removed. Luckily we were able to set up a chute out the window straight into a trailer, as I was likely to have had a sense of humour failure carrying it all down the stairs in buckets. Bet you can’t work out which is the before and after in these photos! 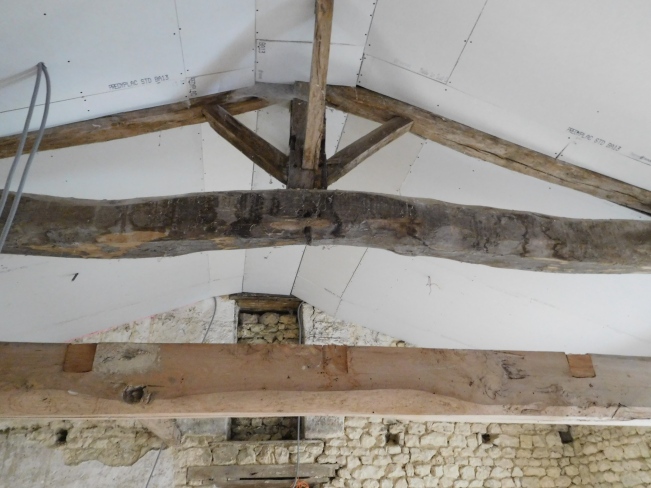 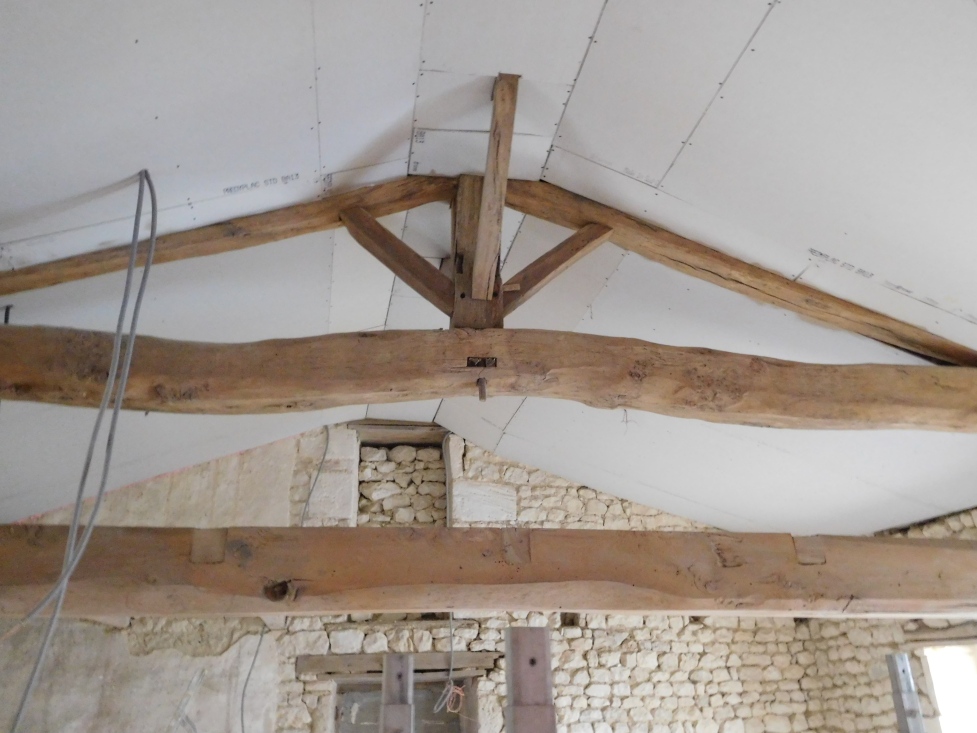 Then the wall was built; first the frame goes up, then one side of plasterboard (and yes it all has to be carried upstairs), the insulation and cabling and finally the last side of plasterboard goes on. Next up the doors are fitted – the little door high up, now known as the hobbit door, is the one I made. Feeling very pleased with myself. 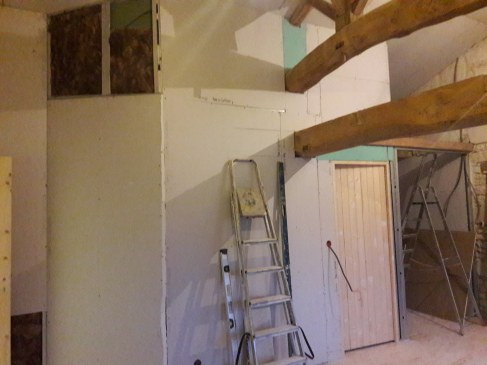 One day there will be a shower here!

In between all this I’ve been staining and finishing off the doors to the other rooms. Eventually the doors will all undergo the transformation below. 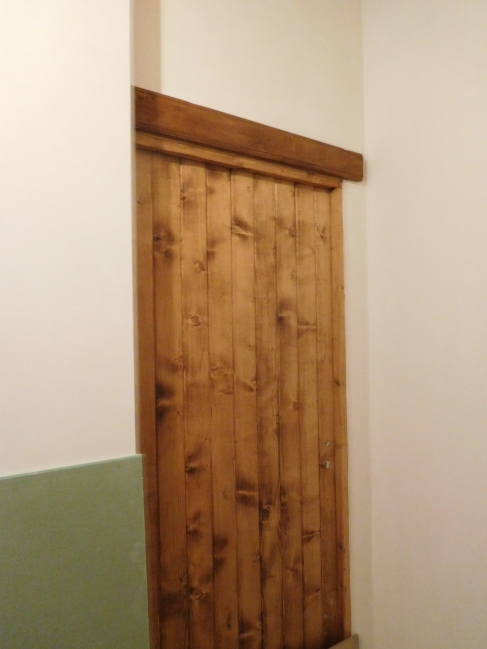 And yes I do still need to add door handles – a minor detail I feel in the grand scheme of things!

Over the past few weeks, as a special treat, Builder Dave decided to give me a break from my house for few days. Yep, you guessed it, off out to do work on other houses – fitting a ceiling rose I had helped remove and then repair, fitting a dish washer, running in cable and socket to run said dishwasher and cutting kickboards to fit in a kitchen. Builder Dave is good like that!

Oh nearly forgot about an EDF update. Well they finally sent the quote, and I dutifully signed all the documents in triplicate as requested, sent off the cheque and waited. And waited. Queue more phone calls and wasted hours being told ‘my call is important to them’…… A date was set for the beginning of February and two very nice men turned up to do the work. Hoorah I thought at last, as the two previous nights I had been plunged into darkness just as I was using the bathroom before bed………. Now, I have a cupboard over my electrical fuse box as do most people and mine doesn’t even have a door so it’s just the framework there. This, apparently, was a major problem as it meant they couldn’t access the bits they needed and the cupboard needed to be removed. I was so incredulous at what I was hearing I actually had to ring my neighbour and ask her to translate as I was suspecting I was mishearing. But no, the work couldn’t be done because of the cupboard. I offered to make a cup of tea. Why? They asked suspiciously. Well perhaps while you drink your tea I’ll remove the cupboard and you do the work (a job that would take no more than 2 minutes). Non Madame! Ce n’est pas possible! But they did turn up the power to 45amps because they felt sorry for me. And off they went to their next job! While quite frankly I had have just about enough of all this and have decided to settle on 45 amps for now and am awaiting a reimbursement of the money and will tackle it again when I have regained some energy to do so (no pun intended).

It’s not all been work though as there have been a few days where it has just been far too cold to work upstairs so I set myself up in front of the fire and got creative with my painting. One day there will be door in a completed room that this will fit over…………

I’ve been out socialising too. It was Builder Dave’s 60th in January so off I went thinking I won’t stay too long, don’t know many there, I’ll just show my face etc. I got home at 2am……..

I’ve found the local cinema at long last, and while getting used to the films only being on 3 times a week and only in English once, I am very much enjoying the 6.50E cost.

Merlot and Malbec are both doing well. Merlot is fully recovered from his operation, although is barely going outside, choosing to let Malbec do all the territory defending while watching from the safety of the sofa. And here is Malbec checking out the work on the beams. I think she’s impressed.