Now where was I?

So what’s been happening since?? More visitors. It’s so lovely that everyone wants to make the effort to travel over to see me in my building site. A few days after saying goodbye to the cousins Sheila and Glyn arrived in their motor home on their way back to the UK after a month of travelling around France. As I was full on work over the weekend with Builder Dave to get bedroom 2 ready for the plasterer, I gave them the keys to my car, on the basis that is it hard enough to park my little tonka toy sometimes so they’d have no chance with the motor home.

Builder Dave and I were doing really well then hit a snag with the electrics – kept shorting out when we tested it all. Cue taking off all the plaster boards we thought we’d finished only to discover that the plasterboard screw had not only gone through the protective sheath designed to stop this happing but it had gone straight into the live wire making the whole metal framework in the wall live!!!! In all his years of building Builder Dave has never seen this happen.

Glyn had already asked if he could cook dinner – well hell yes I don’t need to be asked twice. So while I toiled away upstairs (9am to 7pm each day) Sheila and Glyn kept us supplied with tea and then I came down to a glass of wine handed to me and instructions to go clean up for dinner –marvellous!

A few days after Sheila and Glyn left Liz and Vic arrived. Queue much fizz and giggling. But best of all those of you who have visited and have seen (or should I say smelt) just how damp and moldy the room I was sleepy in was will be pleased to hear that I have now set up my bedroom downstairs in the gite. The girls helped me transform it from dumping ground to loveliness in less than a day – a huge thank you for that. 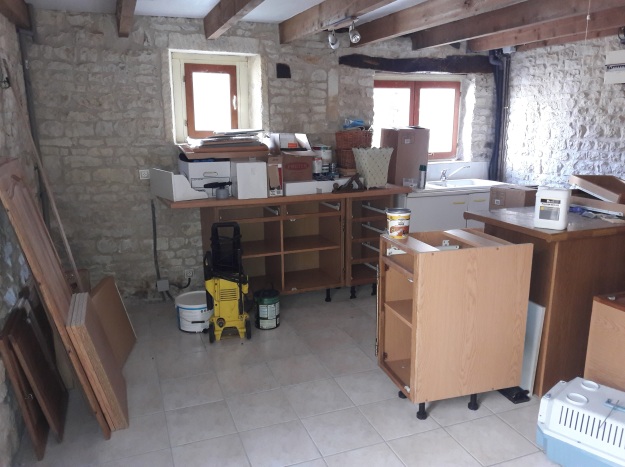 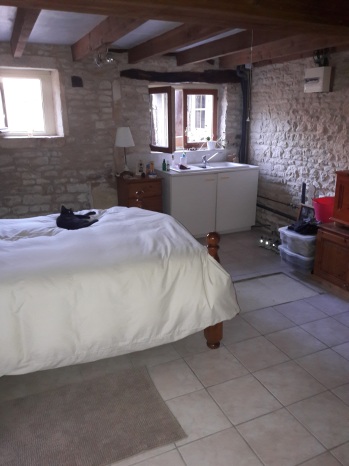 The observant amongst you will of course have noticed the cheeky Malbec didn’t take long to sneak in there – she is now banned.

Next up was to sort out the hot water in the gite so I could stop using the smelly shower room (which I believe is the source of all the damp problems in the house). Cue Builder Dave to the rescue; no problem H, I’ll just adjust the thingy do dah and it’ll all be fine. Hhhmmmm needless to say 2 weeks later a new hot water tank has been fitted. So get this, a 200 litre tank costs €160 but a 100 litre tank costs €240. Which one do you think I needed? So there I was in my lovely hot non-smelly shower thinking at last something has gone smoothly. Well I spoke to soon, I hadn’t even got dry from the shower when I could hear ‘drip, drip’ on to the bed. AAHHHHHH!! So now when I shower I have to remember to put the bucket in place first and I will worry about sorting that out another time.

Way back in June I went down the local health office to apply for my carte vitale –need this to go to the doctors and register so I get some of the costs provided. Armed with multiple copies of each document required and my best French the forms were filled in and I waited to hear from them. Well 4 months later I received a letter and excitedly opened it hoping to find a date for my appointment to pick up my card but no. Inside was a letter asking me to send them a copy of all the paperwork I had already taken and left with them. So far not had anything back. I feel this is going to rumble on for a while…..

In other house updates, work slowed down a bit while the plasterer did his thing. He has now finished 2 bedrooms and the corridor. 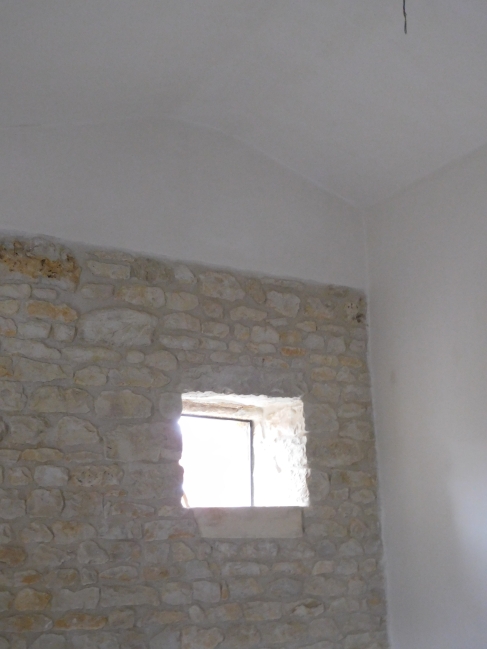 I’ve started repointing bedroom 2 and have one wall finished but need to do the other wall with Builder Dave. Mainly because even on the scaffold I’m too short to reach the top but also because the stones are all very loose so it can only be done in stages throughout the day –hack out and repoint at the top, let it go off, hack off and repoint the lower wall.

My lack of height is also causing a few problems with cleaning the beams because I can’t reach even on the top of the scaffold on tip-toe. I can just about reach the ceiling with the roller and extension pole to apply the plaster sealant and thankfully accuracy is not required. Need to figure out how I’m going to cut in with the ceiling paint – I think it’s going to have to be Builder Dave to the rescue again.

This past week has seen me sanding the plaster lightly to remove all the splashes and endlessly sanding all the beams above the windows and doors and the doors themselves ready to be stained and sealed. To say the house is a bit dusty is an understatement.

So yes sadly after a gorgeous warm and sunny October I am now lighting the fire each evening and happily burning all the old rotten floorboards and slowly working my way through my woodpile. I drive around now and have severe woodpile envy when I see all the lovely neat stacked logs and then look at my pile of ‘waste’ wood. But it burns and gives out heat just the same.

Oh and I did this too – where once there was a gaping hole I now have a window! Still to be finished off properly but as the title of this newsletter says ‘winter is coming’ and the hole needed to be filled. 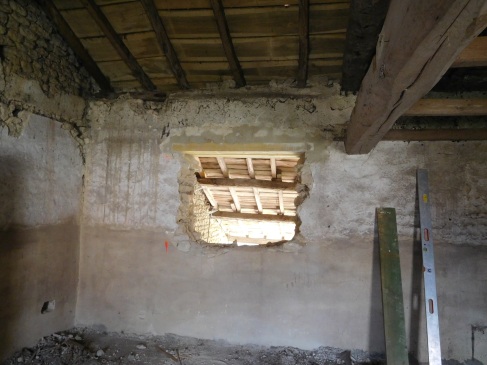 My next visitor was Dad; second time this year. On the way back from the airport we were treated to the most amazing sunset; so good we stopped driving and got out the car to watch it for a while. We had a bit of a social whirl while he was here; 2 dinners out, one lunch out by the Charente River in Cognac in the sunshine, a quiz night at the local pub – well I quizzed, Dad ate the beef bourguignon. I made some cherry and plum vodka while Dad also did a lot of ‘Dad’ jobs but also did a lot of this with Malbec as his excuse of being unable to move:

Today is a ‘day off’ from the building work for me while I look after myself, doing some yoga, meditating and being creative.

But never fear I will be back on it with Builder Dave tomorrow as I’ve got 2 bathrooms to fit and finish by the end of the year…………… along with everything else on the list.

Oh and I almost forgot the Merlot and Malbec update. Well Malbec had her op. I sneaked her in early on account of the all the other cats hanging around. Keep her in for 10 the vets say. Yeah right, do you know this cat? Well I managed 6 days. The day Dad arrived Merlot ended up in a massive fight – came in with a very mangled ear and blood all over him and a very swollen face. So swollen he couldn’t open the cat flap for 2 days. Once he’d cleaned himself up I checked him over and most the blood seemed to be from the other cat, but really at 14 he is old enough to know better…… And in huge breaking news I’ve even managed to get Malbec and Merlot in the same room for an entire evening. While there is still a lot of hissing and growling even Merlot isn’t going to pass up a comfy sofa in front of the fire now.

See you all in December.