Well I finally set up a blog and have a domain name but as usual the technology has defeated me. Oh it’s easy says everyone you just do …… Yes well it’s never as easy as ‘just do’ is it? $£%@!

I won’t give up yet but I’ve wasted enough time on it today so it’s back to the old fashioned newsletter.

When I last wrote to you all Dad and Malcolm were on their way over.

My first big drive in over 20 years to the airport to pick them up and all day the rain was torrential so after setting up all the buckets in the loft I headed off to meet with them feeling confident with my new sat nag. And nag she did but got me there and back with Dad, Malcolm and their cases in one piece.

Friday morning we set off with the intention of buying some garden furniture for us to sit on but the shop only had half a set left….. no cheaper though (!) not that it would have made any difference. But as we left the shop we found this little scrap.

And being the softie I am I of course came home with her. She was about 2/3 weeks old; could barely walk without falling over and her eyes were not fully opened so I wasn’t sure she would last the night. But she did and everyone who comes into the house falls in love with her including the builders who all have photos of her on their phones!! The only one not very impressed is Merlot. Malbec (well what else would I call her) is so very excited to meet him; he however just hisses and walks away. She is now about 7/8 weeks so it’s off to the vets in the next day or so to get her jabbed and booked in for spaying.

And here she is now 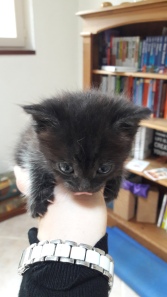 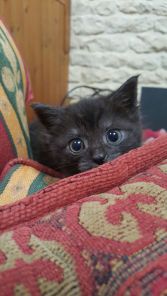 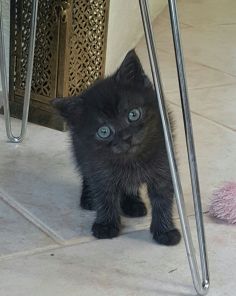 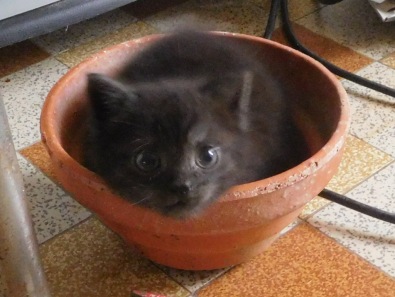 Dad spent the week fixing things and doing lots of little jobs for me and once we had found some WD40 there was no stopping him!

We both found ourselves fascinated by the hummingbird moths that visit the garden and finally just as we were about to leave for the airport I managed to get a picture of one. 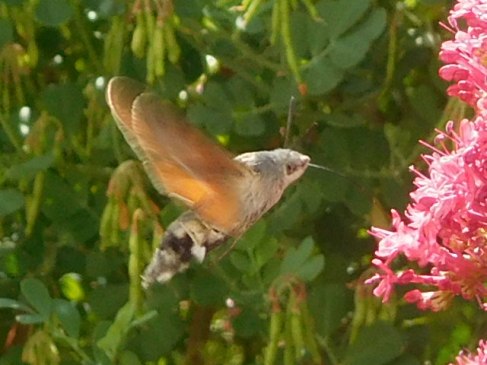 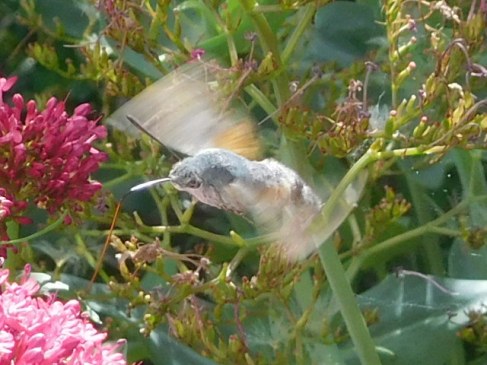 Not 4 days after Dad left, disappointed with my lack of painting, Clare arrived complete with canvases, paints, easels and lots of projects for us to paint. So we set ourselves up to paint and spent a very happy week being creative in amongst the dust and chaos that came with builders who arrived a few days after Clare. More on the builders in a minute as first I’m going to do a bit of shameless showing off! 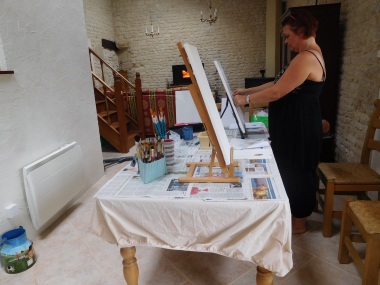 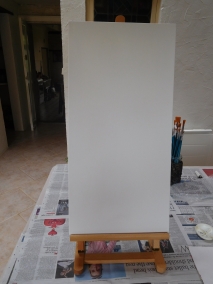 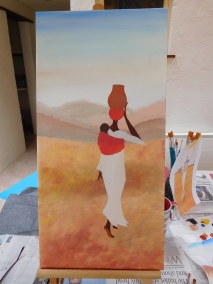 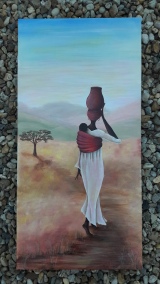 And the finished piece

And so the builders started on the 5th June – dust, dust and more dust along with crashes, bangs, a few oopps along the way and oh my so much coffee. One day was particularly bad for me as was feeling the stress of it all a bit and that was the day that my food processor decided to burn out as I made a cake, then the kettle blew up and to finish the day off I dropped my watch and smashed all the face……

But I can’t complain about the builders at all as they turned up at 8.30/9am stopped for about 20 minutes for lunch and finished around 6.30/7pm. But it did make for long days for me and Clare and most nights we weren’t eating until 9pm.

So last time I showed you a few pics of the rough layout and the amazing beams. After 2 weeks of work I now have rooms and have no need to duck when I enter the space. So in brief one wall started to collapse as they broke through to raise it up so queue mass repointing to be done first and more acros – all ok now though. Once all the false ceiling was down in the part that will be my bedroom I had the joy of finding a rotten beam that had to be sorted out. Luckily I had a spare, as you do, in the barn so that has now been slotted in next to the existing beam for added support.

But apart from that everything is looking good so here are a few before and after photos.

Lots of light from the opened up pigeonnaire. 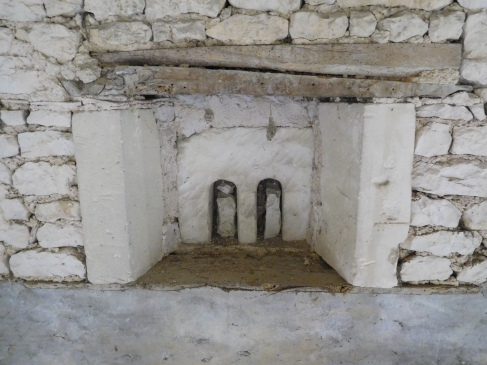 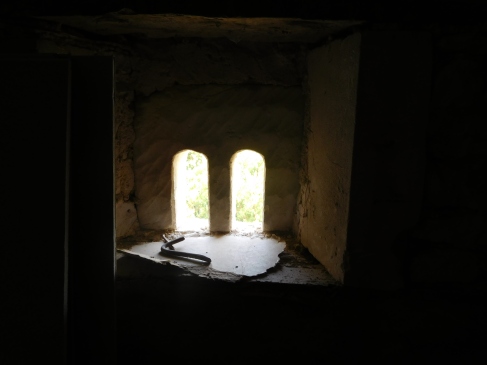 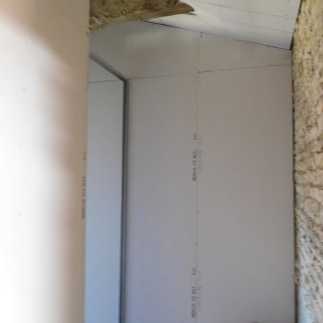 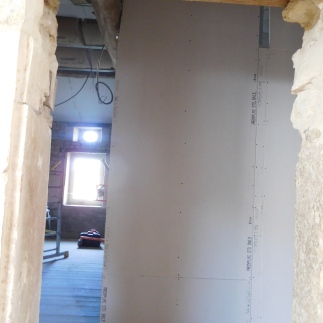 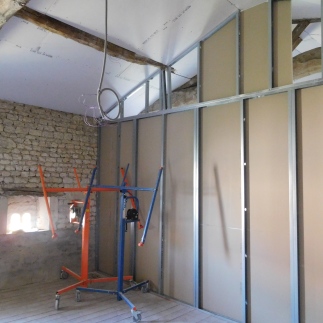 Yes you can still see the lovely beams and yes the walls are currently only one sided – that’s so builder Dave and his apprentice (me!) can do all the electrics – sockets and light switches.

And tomorrow my bedroom will have a ceiling too – so much excitement! 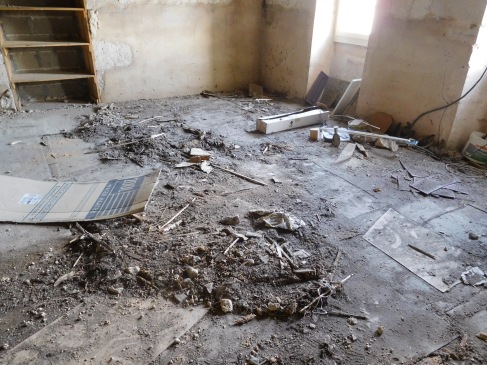 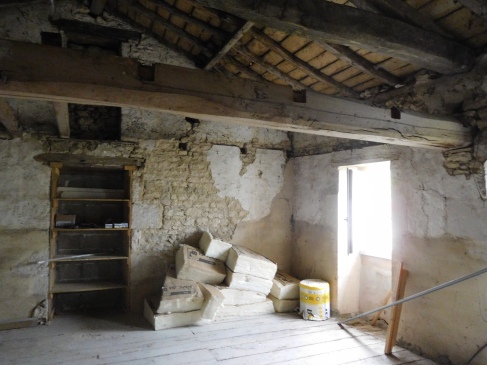 And as if that wasn’t enough while all that was going on it was time for me to admit defeat with the allotment so I got a man in for a day. He found 2 apple trees, 2 plum trees and a hibiscus underneath all the rubbish. Again before and after: 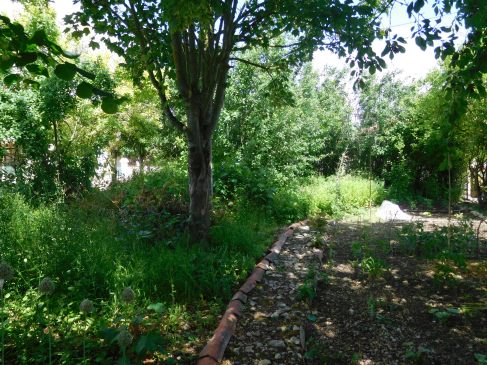 Clare left on the 9th June and I squeezed in a very quick visit to London (10th to the 13th) so I could go and see Take That on the 12th. And as if I’d never left I was back home with Christine on the 13th. Christine was brilliant helping me clean up after the builders left each evening and the final clear up last Friday before we hit the town. Yes the village had a music festival on for the evening. All I’m saying on the matter is that neither of us was up for much the next day!!!!

I have also discovered brocantes – car boot sales to you and me but goodness what treasure trove they are and I appear to have started a new career in upcycling mirrors, lights, chests of drawers and wardrobes. The brocantes run all summer and are a great way to furnish your house with traditional lights / mirrors etc that noone wants for a few euro rather than paying hundreds for modern lights etc that just wont work in the house. As this letter seems to have got a bit long I’ll share some of that with you in the next newsletter (nothing at all to do with the fact I haven’t actually finished cleaning and upcycling my purchases……….)